The force grain that gave the fast news runners of the Incas wings could still provide great leaps today. Even though the modern media world works even faster than the light-footed Chaskis – health and well-being are topics that will never lose their relevance.

Interesting facts about the Chia plant 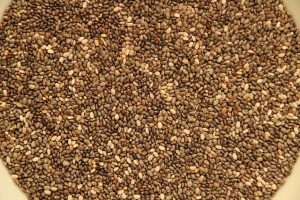 Chia grows in Mexico and is grown today in Guatemala, Bolivia and even in Australia. It thrives best in the tropics or subtropics, here also in high altitudes. Chia plants, which are related to sage, grow up to two metres high and flower purple from July to August. The shiny white or brown closing fruits or seed capsules, which are only a few millimetres in size, are used.

For more than 4000 years, the Chia plant has been one of the most important staple foods in South and Central America for Aztecs, Mayans, Incas and Co. … is. Chia did not only fill the stomach, the grains gave enormous endurance as well as mental and physical strength. When the Spanish conquerors crushed the Aztec Empire in the 16th century, they quickly forgot the small black grain of strength-giving power not without reason. The Chia plant lost its way to Spain in the course of these conquests and was thus given the misleading name Salvia hispanica. For many years, the seed did not have any significance for humans themselves, and they were appreciated as animal feed. For some years now, the herb with its bright blue flowers, which belongs to the genus Sage and the family of labiate plants, has been celebrating its comeback as an almost perfect food supplement. The European Food Safety Authority has been dealing with the use of grain since 2009 and in 2013 it finally paved the way for Chia plant as a “novel foodstuff” into the EU.

The commercial cultivation of the Chia plant is nowadays carried out in South and Central America and Australia. By means of large sowing machines the seed is spread in grooves, in November the seed capsules (Kalix) are harvested with a combine harvester. After thorough cleaning, the valuable grain starts its journey around the world. 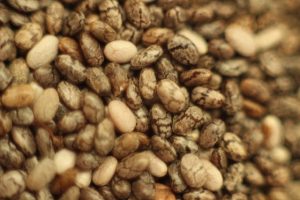 Under favourable conditions, annual plants can also be grown in European latitudes and even in the domestic garden. Precondition is a warm, sunny location and a long frost-free period. The Chia plant can cope with poor, nutrient-poor soils and withstands longer dry periods well, but also loves regular irrigation, but without waterlogging.

In spring, the seeds are planted individually in pots or flower boxes and only just covered with soil. When the plants are about 5 cm high, they can be planted outdoors, and from May onwards the seeds will also grow well outdoors. Insects largely avoid the Chia plant, so that it can be grown pesticide-free without any problems. Flowering is expected from the beginning to mid-September, the plants need about 45 (frost-free!) to develop the seeds. Days. Now the time has come to pick the flower heads and carefully shake out the seeds, which contain so much good for body and mind.

The healthy seeds of the Chia plant

The resulting grain not only has a surprisingly high content of omega-3 and omega-6 fatty acids, it also contains these two components in a particularly favorable ratio. The?-linolenic acids contained in the Chia oil are important suppliers of unsaturated fatty acids, particularly for vegan nutrition. In addition, important minerals, trace elements and vitamins lie dormant in the Chia plant. The seeds are gluten and cholesterol-free, high in fibre, well saturating and at the same time low in calories. No matter whether you taste it as a nutritious breakfast porridge, whether you add it to the bread as a baking ingredient or prefer fresh sprouts, Chia cuts a good figure – not only in the figurative sense.