Chia seeds are real all-rounders. Not only are they really healthy and a wonderful source of nutrients, they are also versatile in the kitchen. Chia seeds have earned their reputation as superfood due to their unique richness in important nutrients. They not only have an extremely high protein content, but are also rich in omega-3 and omega-6 fatty acids, and are also a good source of calcium and iron. This characteristic makes the Chia seeds an ideal part of a healthy and balanced diet.

Chia seeds are characterized by two essential characteristics. First of all, they ensure a long-lasting feeling of satiety and secondly, Chia seeds are almost tasteless. This is precisely why Chia seeds can be used in very different recipes and thus improve the nutritional balance in many recipes.

Chia Gel is the basic recipe for using Chia seeds. Chia seeds and a liquid, such as water, soya milk or almond milk, are mixed together in a ratio of 1:6 for the Chia Gel. For example, half a cup of Chia seeds and 3 cups of water. The mixture is then placed in a cool place so that the seeds can swell. After about two hours, a gel-like mass is formed which can be used as a basis for many recipes and smoothies. Chia Gel is extremely rich and stays in the refrigerator for about a week. It is better to use the mass on the same day. 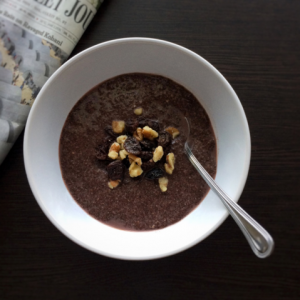 Another classical recipe with Chia seeds is the Chia Pudding. This is not a classic pudding, but a swollen Chia seed, similar to the Chia Gel. For this recipe, simply add approx. put four tablespoons of Chia seeds in a bowl and add 250 millilitres of liquid, for example almond, soya, oat or classic cow’s milk. The whole thing must swell for at least two hours. Spices such as cinnamon or vanilla, cocoa or sweeteners such as honey or maple syrup can be added to the mixture, depending on taste. Before serving, you can add any fruit you like. This recipe can be prepared wonderfully and stored in the refrigerator for up to a week. Therefore, it is particularly suitable as a quick breakfast basis. Chia seeds provide a long-lasting feeling of satiety and contain many valuable nutrients that give the body the necessary energy for the day.

Jam can also be made with Chia seeds. For this recipe, a handful of the selected fruit has to be crushed and mashed. Berries, plums or apricots are suitable. Then add the chia seeds and a sweetener of your choice, such as honey or vanilla extract, and mix in. Depending on the taste and type of fruit, a little lemon juice can also be added for a slightly sour note. Then put everything into a preserving jar and put it in the fridge. Make sure that the jar is not full, as the jam is still spreading through the Chia seeds.

Chia seeds can also be used to make delicious pancakes, even without flour. It requires two bananas, four eggs and 2-3 tablespoons of chia seeds, as well as some cinnamon or vanilla extract. First crush the bananas and stir in the beaten eggs. Then add Chia seeds and spices. If you like, you can also add small pieces of apple or blueberries to the dough. Afterwards, the pancakes can be roasted in the pan. Serve with maple syrup.

The whole thing also works with flour, but if there is a chance to reduce the calories and keep it tasty, we prefer this version of the recipe.

With this bread recipe with Chia seeds, 700 grams of wholemeal flour, e. g. spelt, buckwheat or rye wholemeal flour, or a flour mix with a pack of dry yeast, 20 grams of dry sour dough, 3-4 tablespoons of Chia seeds and flax meal are mixed. Then slowly add 400 millilitres of warm water and knead until a sticky dough is formed. Cover the dough for about an hour until it has approximately doubled. Then form into a loaf and sprinkle with seeds if necessary. Finally, carve in several times and bake in the oven at 180 degrees Celsius for about an hour. Very tasty!

For this recipe, rice pudding must first be cooked. For this purpose, one litre of milk is heated and then about 250 grams of rice are added. When the rice has completely absorbed the milk, the rice pudding can be sweetened, for example with a tablespoon of cane sugar or a tablespoon of honey. If you like, you can also add some cinnamon and cocoa powder. Mix everything well. Then add 250 grams of dried fruit, such as raisins, dried cranberries or finely chopped dates or plums, as well as 3 tablespoons of Chia seeds and mix in. Then place the mixture on a baking tray and smooth it down to the height of the thumb. If you want, you can sprinkle more Chia seeds or other seeds and grains on the mass. The whole thing at approx. Bake at 150 degrees for 30 minutes. After cooling, the mass can then be cut to the desired size. Then wrap the individual bars in aluminium foil and place them in the freezer and take them out one or two hours before consumption.

The Chia Fresca is the classic Mexican soft drink made from Chia seeds. The production of the recipe is very simple. Add two teaspoons of Chia seeds to a glass and add about 300 millilitres of cold water and a dash of lemon. Depending on taste, the drink can be sweetened with syrup or honey. The drink has to be drunk relatively promptly, otherwise the Chia seeds swell.
This recipe is very refreshing in summer. If you like it alcoholic, you can add a dash of rum. We prefer to stay non-alcoholic.

A particularly refreshing recipe for Chia seed fans is the Chia ice cream. Similar to Chia pudding, Chia ice cream is based on a liquid of your choice, such as almond, coconut and/or rice milk. Approx. 250 millilitres are approx. 100 grams of fruit of your choice, as well as 2 tablespoons of Chia seeds and 1-2 tablespoons of honey for sweetening. For example, berries or mashed mango are suitable fruits. All ingredients are mixed and refrigerated for at least two hours in the fridge so that the Chia seeds can swell. The mass can then be filled into ice moulds for ice-cream on the handle and cooled overnight in the freezer. With this recipe, a delicious and healthy ice cream is made.

Another very healthy recipe with Chia seeds is the green smoothie. Green smoothie offers a wide variety of combinations. Generally speaking, however, a ratio of one third green, for example fresh spinach, lettuce or herbs, to two-thirds fruit is used. In addition, some liquid and superfood can be added. A classic recipe for a green smoothie consists of two handful of pluck salad, half a banana, an apple, the juice of an orange and a tablespoonful of chia seeds. The seeds in this recipe ensure a particularly long-lasting feeling of satiety. The greener and bitterer the raw materials are, the more suitable this recipe is for slimming. As we already know today: bitter substances promote fat burning immensely. The combination of bitter substances and Chia seeds is almost perfect when it comes to eating healthy food and having the goal of permanently losing weight.

Other uses of Chia seeds 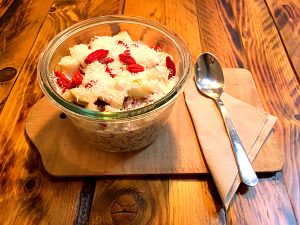 As you can see, there is no limit to your imagination in cooking and baking with Chia seeds. So you can add an extra amount of good nutrients to almost any recipe you want by using Chia seeds. Chia seeds not only make food and drinks even more interesting, but also healthier.

Good for people who want to lose weight healthily

By the way: With Chia seeds, healthy weight loss is possible. The fact that the seeds swell in the stomach and reach over ten times their mass means that a long-lasting feeling of satiety occurs after consumption. At the same time, Chia seeds provide a lot of energy and all the healthy nutrients the body needs. So you eat a healthy diet and are at the same time full, without the hunger attacks that can throw you back. Perfect!